In March 1914 two people met in Pondicherry: Sri Aurobindo, who had fled arrest by the British and sought refuge there and, Mirra Alfassa, later known as the Mother, the wife of a French politician. Their meeting led to an evolutionary step in spiritual consciousness and the birth of Auroville, heralded as the City of the Future. What kind of future?
Auroville started from scratch across a barren plateau in South India in February 1968 with just two things: a Charter and a City plan, welcoming people from around the world to create a new life beyond national rivalries, social conventions, self-contradictory moralities and contending religions. Fifty years on...
What is Auroville?
Auroville is a universal township in the making for a population of up to 50,000 people from around the world.
How did Auroville begin?
The concept of Auroville - an ideal township devoted to an experiment in human unity - came to the Mother as early as the 1930s. In the mid 1960s the concept was developed and put before the Govt. of India, who gave their backing and took it to the General Assembly of UNESCO. In 1966 UNESCOpassed a unanimous resolution commending it as a project of importance to the future of humanity, thereby giving their full encouragement.
Why Auroville?
The purpose of Auroville is to realise human unity – in diversity. Today Auroville is recognised as the first and only internationally endorsed ongoing experiment in human unity and transformation of consciousness, also concerned with - and practically researching into - sustainable living and the future cultural, environmental, social and spiritual needs of mankind.
When did Auroville start?
On 28th February 1968 some 5,000 people assembled near the banyan tree at the centre of the future township for an inauguration ceremony attended by representatives of 124 nations, including all the States of India. The representatives brought with them some soil from their homeland, to be mixed in a white marble- clad, lotus-shaped urn, now sited at the focal point of the Amphitheatre. At the same time the Mother gave Auroville its 4-point Charter.
Where is Auroville?
Auroville is located in south India, mostly in the State of Tamil Nadu (some parts are in the State of Puducherry), a few kilometres inland from the Coromandel Coast, approx 150 kms south of Chennai (previously Madras) and 10 kms north of the town of Puducherry.
Who are the Aurovilians?
They come from some 49 nations, from all age groups (from infancy to over eighty, averaging around 30), from all social classes, backgrounds and cultures, representing humanity as a whole. The population of the township is constantly growing, but currently stands at around 2,500 people, of whom approx one-third are Indian.
Overview of the city plan

Peace Area
At the centre of the township lies the Peace Area, comprising the Matrimandir and its gardens, the amphitheatre with the Urn of Human Unity that contains the soil of 121 nations and 23 Indian states, and the project of a lake to help create an atmosphere of calm and serenity and to serve as a groundwater recharge area.
Industrial Zone
A 109-hectare area to the north of the Peace Area, the Industrial Zone, a zone for "green" industries, is focused on Auroville's efforts towards a self-supporting township. It will contain small and medium-scale industries, training centres, arts and crafts, and the city's administration.
Residential Zone
The largest of the four city zones, comprising of 189 hectares, the Residential Zone is bordered by parks on the north, south and west. Main access to the zone will be through the crown road with further traffic distribution via five radial roads that divide the zone into sectors of increasing densities. This zone wants to provide a well-adjusted habitat between individual and collective living. 55% of the area will be green and only 45% built surface, thereby creating an urban density balanced by nature.
International Zone
The International Zone, a zone of 74 hectares to the west of the Peace Area, will host national and cultural pavilions, grouped by continents. Its central focus is to create a living demonstration of human unity in diversity through the expression of the genius and contribution of each nation to humanity
Cultural Zone
Planned on a 93-hectare area, situated to the east of the Peace Area, the Cultural Zone will be a site for applied research in education and artistic expression. Facilities for cultural, educational, art and sports activities will be located in this zone.
Green Belt
The city area with a radius of 1.25 km. will be surrounded by a Green Belt of 1.25 km width. As a zone for organic farms, dairies, orchards, forests, and wildlife areas, this belt will act as a barrier against urban encroachment, provide a variety of habitats for wildlife, and serve as a source for food, timber, medicines etc. and as a place for recreation.
Presently an area of 405 hectares, the Green Belt - though incomplete - stands as an example of successful transformation of wasteland into a vibrant eco-system. Its further planned extension with an additional 800 hectares will make it into a remarkable demonstration site for soil and water conservation, ground water recharge, and environmental restoration. As lungs for the entire township, it will complete the healing process that Auroville started several decades ago. 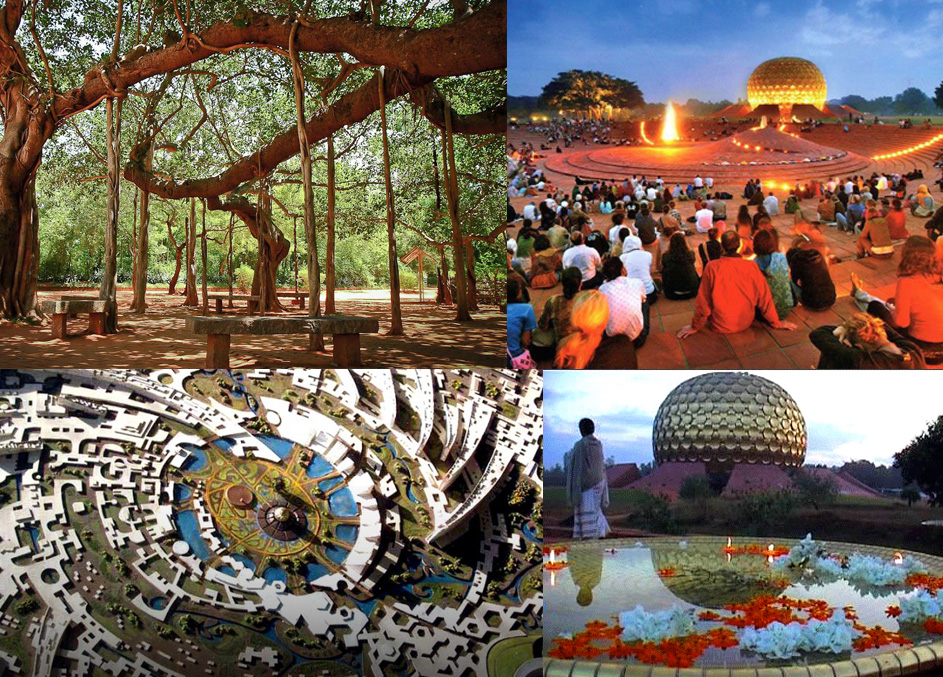 Our yoga practice in this retreat will vary. Meditation and energizing yoga in the morning hours and relaxed hatha yoga in the evenings. All practitioners are welcome in this retreat even totally beginners. Also there will be happening several workshops where one could take part with a 25% discount.

Vérité is a Yoga and Program Center in Auroville. Vérité’s objectives are an ecological life style, organic nutrition, positive health, wellness, spiritual practice and retreats serving Auroville and its guests. Vérité campus features sustainable infrastructure, alternative energy (principally solar), a community-based guest house, organic garden, orchard and kitchen, and facilities for our retreat such us a big shala and props and mats. Accomodation is available in doubles and triples rooms. 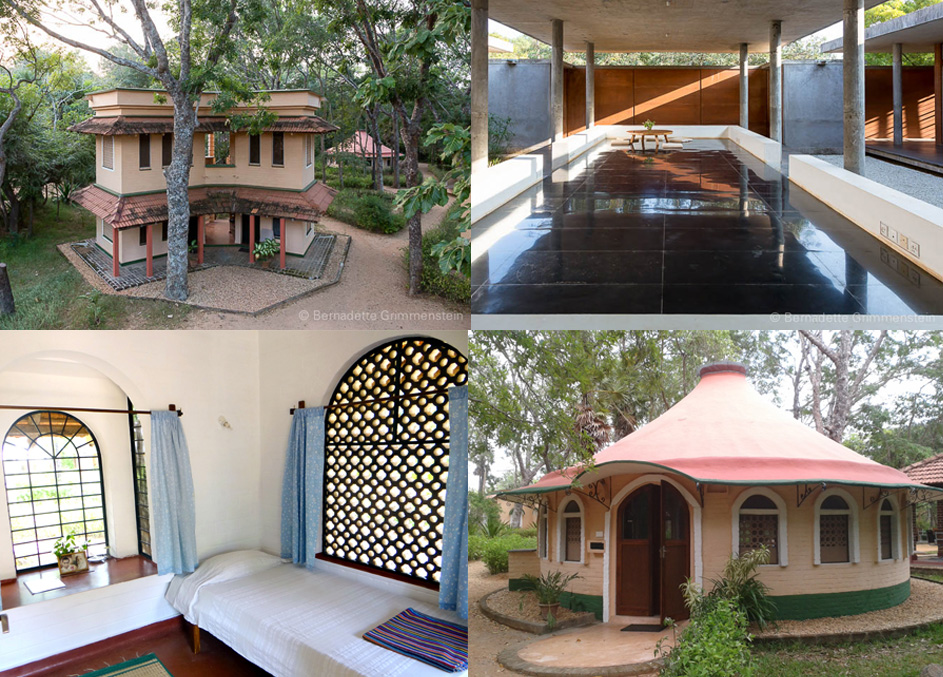 
THINGS YOU NEED WITH YOU

This is far away the best time of the year to visit Auroville. There is an average temperature of 25°C, which is just perfect for a vacation. The beaches are comparatively colder, but there is a phenomenal bonfire at Matrimandir which compensates for that. No wonder people flock to Auroville during this time of the year, not only from Tamil Nadu but from faraway states as well.


THINGS TO DO AND SEE 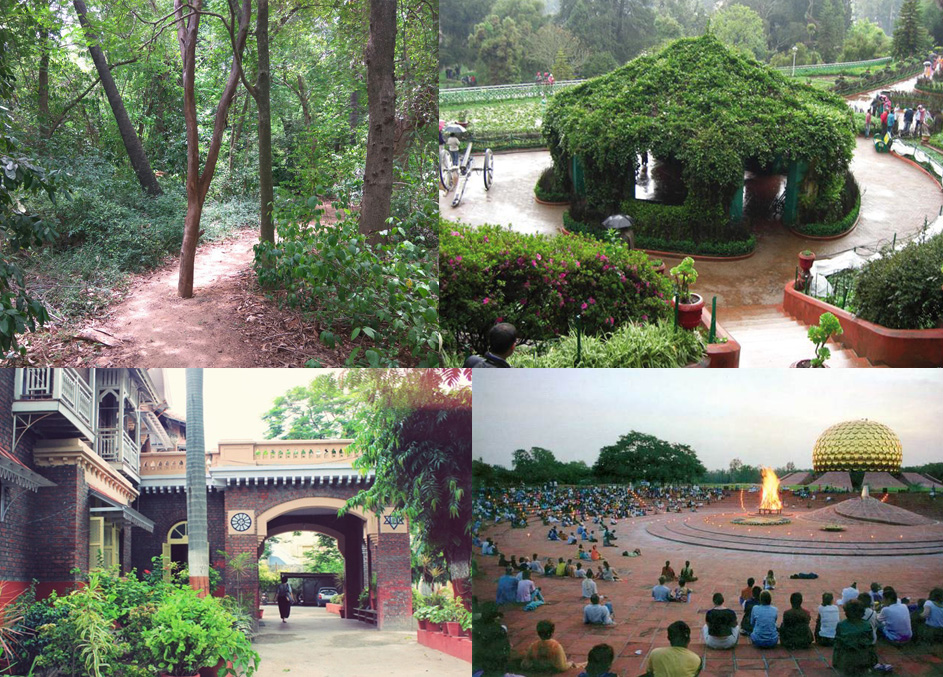